So who on earth is Shiva and why have I decided to dedicate this blog in his name?

Lord Shiva, or also called Mahadeva, which means the Auspicious one (see below what that means).

Shiva is the third god amongst the three most important ones in Hinduism. These three, are responsible for the creation, upkeep and destruction of the world. Brahma is the creator of the universe, Vishnu is the preserver and Shiva is the destroyer of the world.

Now that might maybe be a bit off-putting. Destroyer of the world sounds quite negative. I see this a bit differently, in order for something new to be created it first needs to be destroyed. As humans, we constantly renew ourselves. When we hang on to things and become stagnant we tend to be more unhappy in life. For me, Shiva symbolises the force of letting go. In yoga we somehow destroy ourselves, get under the skin of who we really are. Not only do our bodies transform but after a while of practice we realise that the mind and relationship to life and people change as well. 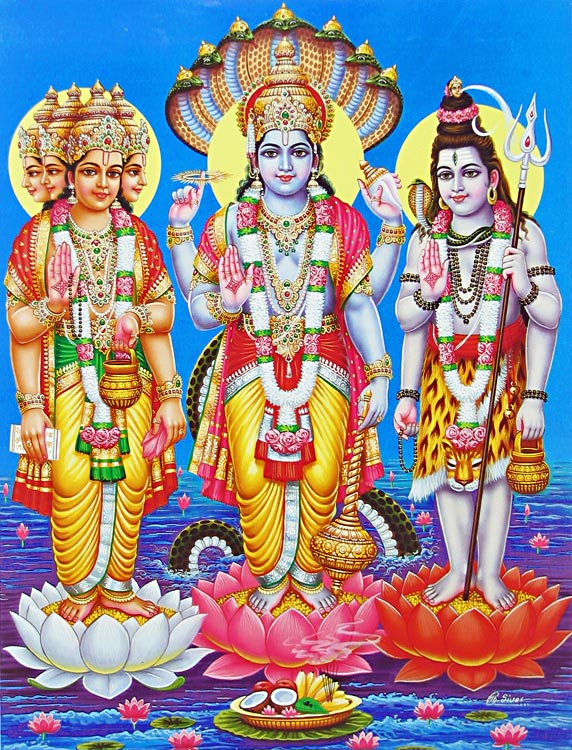 Brahma to the left, Vishnu in the middle and Shiva to the right.

In the Vedic philosophy, the view is also that there is no real creation or destruction of anything in the universe. The visible universe is but a manifestation of the timeless unmanifest. Just like the waves arising from the sea. So Shiva is that power of eternal return and transformation, not only a force of destruction.

So according to this view, Shiva dissolves all difficulties, sorrows and bondage and takes us back to the freedom of the unmanifest. Hinduism is something quite complicated and there are many views on Shiva and the ways he is looked upon so I’m only briefly describing how his meaning is interpreted by me.

I would say he is the god that is the most associated with yoga. He is looked upon as the immortal life force, Prana, the primal sound, OM or Pranava, and the primal being of pure consciousness, Atman, our inner self and true nature. When we practice yoga, it’s kind of a self discovery to find out who we really are, how we can be more aware and conscious in our lives and remember how to breath.

Shiva as the Supreme Reality

“Shiva as the primal power of light and awareness represents our own higher search for Self-realization, and is not simply an external deity. That inner light is the real basis of life and is beyond all birth and death. It is ever resounding as the cosmic vibration that is both the manifest and unmanifest reality. It is our true being beyond the limitations of body and mind, which are but its instruments.”

Part from the cosmos thing, he is also a deity of nature and lord of animals. I really like this aspect as I’ve always been a big animal and nature lover. He is also seen as the lord of mercy and compassion. He protects us from lust, greed and anger.

What about Shiva’s dance? What’s so special about that?

Shiva is often illustrated as the Lord of the dance (Nataraja) and associated with dance and music. This is how he destroys the world, by dancing and dancing until dust appear and the ground breaks under his feet. This part of the dance is often called Tandava in Vedic terms.

There is another side of the dance too called Lasya. This one is graceful, delicate and expresses emotions on a gentle level. This part of dance is considered more as a feminine dance towards the goddess Parvati. These two dances Tandava and Lasya are associated with the destruction-creation of the world.

For those of you who have read this previous blogpost, you know that I used to be a Tango dancer. I sometimes used to dance so much in marathons I couldn’t walk for a week. You get so soaked up in the intensity of the dance, the music, the energy that the physical body doesn’t exist anymore, doesn’t matter anymore because you have reached a “higher level” of consciousness. Yes, tango can do that to you. I used to be a little bit addicted to that feeling and can somehow relate to Shiva as the dancing destruction of the world.

So there is the main answer to why I’ve called this blog Shiva’s Dance. My 8 years as a Tango dancer have somehow transformed into a different consciousness of mind and searching for something else in yoga. Shiva’s dance tie these two worlds together for me as I can relate to both. As a curious mind and on the search for what call “the Energetic body”, this summarises it pretty well. I’ve had to dance to kind of destroy the old me and now it’s about creating new again. Finding that integration of physical, mental and spiritual energies in the ideal of yoga.

So let’s demystify all those objects that he is wearing. That would be a great outfit for next Halloween by the way! The crescent moon symbolises the time cycle through which creation evolves from the beginning to the end. He himself is somehow beyond time, or at least not on the same time zone as us. He has three eyes where the right eye is the sun, the moon the left one and fire is the third one.

The sun and moon “eye” indicate his activity in the physical world whereas the third eye symbolises spiritual knowledge and power. Maybe you have hird your yoga teacher saying that in class sometimes that you should gaze upon the third eye or put your thumbs there. I have to say that in Hinduism they had a pretty good sense of imagination! Jesus looks so boring compared to this guy.

Often in pictures you see that he has kind of half-open eyes and almost look a bit drunk. According to the belief, this is to illustrate that he uses his yogic power to project the universe from himself and to show his yogic posture. (I wouldn’t recommend imitating this though in class, maybe your teacher think you will faint).

The snake around the neck says to also symbolise the yogic power with which he dissolves and recreates the universe. Like a yogi, a snake hoards nothing, carries nothing and builds nothing, lives on air for a long time, and lives in mountains and forests. A quite beautiful metafor I have to say.

What about that tiger skin? As an animal friend, I though this one was a bitt strange. Apparently it illustrates the idea that he is the source of creative energy that remains in potential form during the dissolution state of the universe. It somehow symbolises potential energy, like an energy mat.

It turned out to be quite a long post. I find hinduism fascinating with the different stories and myths. Sometimes I feel that we live in such a scientifically proven world that we lost all “magic”. Reading these stories and imagine beliefs from the past somehow brings back some of that magic. So hopefully now you know a littlebit more about Shiva and why this yogablog is called Shiva’s dance. You even know what the dance stands for.

Ashtanga Yogi on an awakened path to consciousness and life. Enjoying the search and discovery of light and the energetic body through various form.